Even at the starting line, it is evident that providing pre-hospital healthcare is not a goal of organizers of the Hotter â€™N Hell Hundred race in Wichita Falls, Texas, the largest sanctioned century bicycle ride in the United States. For the nearly 14,000 riders, Executive Director Ben â€œChipâ€ Filer said the goal is to eliminate the need for any hospital care at all.

â€œOne of our primary goals is to ensure that everyone who comes to the race goes home vertical,â€ he said. With more than 1,000 medical volunteers at 15 stops along the 100-mile route, he said the medical staff, doctors, EMS personnel, nurses and others â€œcan do a lot of stuff out there that would normally send people to the hospital.â€

Their efforts paid off. Although medical staff saw some 900 people throughout the day, only 14 ended up in local emergency departments.

This year it wasnâ€™t the heat that caused problems for riders, it was the wind. Even at 6 a.m., before the sun had risen or the race had begun, Gene Johnston, a first-time rider in the 100-mile race, said the wind would be a problem.

Noting that he had logged about 900 miles since June 1 preparing for the race, he said, â€œThe wind is going to be the biggest problem if the wind keeps up today.â€

By mid-morning, David Melton, a biker who was brought to the medical tent for treatment of a minor injury said, â€œThe wind is so brutal.â€

And Kim Stringfellow, a nurse working at the final rest stop before the finish, said, â€œThe temperature is milder than in past years, but the wind is worse. (The bikers) are coming in more tired.â€

At the same rest stop, Trey Mial, a biker from Houston riding the 50-mile race, said, â€œThe heatâ€™s not too bad. The windâ€™s been kicking everyoneâ€™s butt especially in the last stretch.â€

But out at the remote stops, where medical staff members, according to Lee Ackley, a physician assistant from Iowa Park, Texas who was volunteering his medical services for the 12th year, have to improvise, the staff members turned the wind to their advantage.

Despite the wind and heat, the medical team, including of doctors, nurses, paramedics, EMTs, physician assistants, nurse practitioners and others, staffing the medical tents all along the route, was prepared. The on-site staff, along with American Medical Response ambulances that provide pre-hospital care in Wichita Falls and Air Evac Lifeteam that provides helicopter support, provided routine medical care including suturing wounds, IV fluid therapy and massages for muscle cramps. But they worried most about the potential for life-threatening, heat-related injuries.

Before the race began, Nicholas DeFouw, a medical doctor and participant in the sports medicine fellowship program at John Peter Smith Hospital out of Forth Worth, predicted that he and the other five doctors working in the medical tent at the start/finish line would see a lot of cramping, as well as a number of broken bones, dislocations, lacerations and, of course, heat-related conditions. He said some people come to the race but just are not acclimated to the heat. He said people are acclimated to living in an air-conditioned environment. Then they come outside and spend five hours exercising in extreme heat but their body cannot adapt that fast.

Keith Williamson, university physician at Midwestern State University and medical director for the race, said the race was a tremendous learning opportunity. He said the medical staff members would see illnesses and injuries that they had not seen before. Even though they might have learned about them in school and might, theoretically, know how to diagnose and treat them, they have not actually worked directly with a patient with that illness or injury.

â€œYou see a bunch of new things, new things that arenâ€™t in your diagnostic lexicon,â€ he said.

Jim Barbee, medical doctor and program director of the sports medicine fellowship since 2002, said, â€œThey learning how to manage a major medical treatment unit at a large public event. They love it. Itâ€™s one of the few times you can work the devil out of residents and they love it.â€

Jason Mogonye, a medical doctor and clinical faculty member at John Peter Smith Hospital, said he also wanted the sports medicine fellows and other medical staff members to learn in this unique environment.

â€œI want them to know how to handle athletes who have been competing for a very long period of time and trauma that happens with a bicycle race,â€ he said.

Barbee also noted that the tent could have been staff primarily with paramedics. However, â€œthe public expectation is for doctors.

â€œWeâ€™re helping (the doctors) learn how to help us,â€ he said.

While the bruises, broken bones and scrapes occupy most of the time of the medical staff on race day, Williamson and the other medical staff members, all volunteers, spend most of their time discussing how to treat the heat-related injuries prior to the race.

Kenny Hoffman, operations supervisor for AMR, said he began watching the weather forecast a couple weeks before the race.

â€œI kept waiting to see what the temperature was going to be. It actually cooled off. We were thankful for that.â€

Despite temperatures on race day that average 95ËšF and that have reached 109ËšF, Filer said they were lucky this year because it cooled down â€” down to a high of 96ËšF, fully 10 degrees lower than in 2011.

Hoffman said AMR, which has been working the race since at least 1991, typically staffs two extra ambulances on race day to help with call volume, but his biggest problem is the bikers themselves.

â€œBikers donâ€™t move out of the way,â€ Hoffman said. â€œThey hear lights and sirens and they just say, â€˜whatever.â€™ Getting to a rider that was sick or hurt, that is a real problem.â€

While medical staff member spend time preparing for the most obvious types of injuries, including heat-related injuries, from a emergency management point of view, Henderson said he does not really plan for the heat at all even though last year was the hottest event on record and the first time the race was black-flagged.

â€œHeat is a given,â€ Henderson said. â€œI am more concerned with other threats such as the possibility of lightning and storms. I also plan for large wildfires in the counties and city. We are always vigilant on watching (the Wichita Falls) Multi-Purpose Event Center for suspicious activity that people might want to cause chaos to a large event. Those are more pressing to me than heat.â€

Because heat emergencies can be life-threatening and acute, Hoffman said he works closely with the dispatchers and race medical staff.

â€œWe determine whatâ€™s the best care that can be given to the patient. We look at who can get there the fastest. It works great,â€ he said.

Ackley said few people get to see the number of heat-related injuries that they can see at this race.

In particular, he said medical staff members are on the look out not only for dehydration but also for hyponatremia, also called water intoxication, which results from drinking excess amounts of plain water causing the blood serum level of sodium to go down. Hyponatremia is becoming more prevalent as participation in endurance races such as the Hotter â€™N Hell Hundred increases, particularly by inexperienced or unacclimated athletes. Because the body loses sodium when it sweats, athletes have to consume additional sodium and water to replace what they have lost. Consuming water alone decreases the concentration of sodium in the blood and can result in nausea and vomiting, confusion, headache, paresthesia, puffiness and seizures.

As part of the medical protocols for the race, Williamson has a specific protocol for hyponatremia. In contrast to the protocol for dehydration and overheated riders both of which call for which calls for IV therapy, â€œhyponatremia can be worsened by hydration,â€ Williamson states even in the IV protocol.

Williamson said it was a rider a number of years ago that got him interested in hyponatremia. That specific rider came into the medical tent and â€œjust needed to rest.â€ Shortly thereafter, he had a seizure. Based on the research in exercise-associated hyponatremia, he said the medical staff at the race was â€œon the cutting edge.â€

He said before they learned how to treat hyponatremia properly, they were putting about four people per year in intensive care from the race. â€œWe havenâ€™t had to put anyone in intensive care since,â€ he said.

Defouw said it was clear that overhydration without adjusting the electrolytes in the body was a problem. A potential solution, he said. Pickles.

â€œThe riders worry a lot about hydration so they drink a lot of water and even Gatorade. They rehydrate but sweat the salt of out their body. Clinically, racers say the feel better after they eat pickles,â€ Defouw said noting that there were large, indeed huge, jars of pickles at the medical tent. â€œIt takes a lot of time (to restore the electrolyte imbalance) when you have to digest them.â€

Almost as if he had gotten the message before the race, John Battaliou, a rider from Oklahoma City, sat at the starting line waiting for the sun to rise and for the blast of the canon. He was prepared. He had two bottles of green juice strapped to his bike each containing pickle juice and Gatorade. He said his goal was not only to eliminate the need for medical attention but to eliminate his need to make any rest stops.

â€œNo rest stops. Hell no. Rest stops are for sissies,â€ he said, stating that he expected to be done in less than five hours. 4:37 was his best. â€œYou have to be prepared and you have to know your limits.â€

It was a mantra medical staff members found themselves saying over and over during the day as they took care of hundreds of riders and visitors, saving almost all of the from a trip to the hospital. 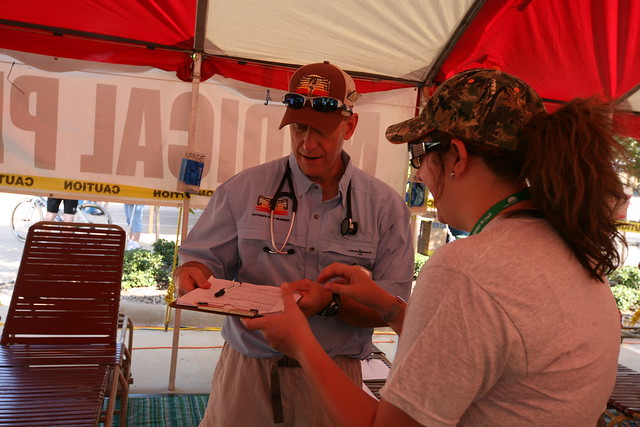