It doesn’t seem like 30 years ago. I remember when Ken Siver was president of JEA. I was pretty active in JEA having attended my first JEA convention while student teaching at Anderson High School with Jack Harkrider in 1988. And, Linda Puntney was the newly appointed executive secretary of JEA with headquarters in Manhattan, Kansas at Kansas State University. Her title was quickly changed to executive director. And one of the first big initiatives Linda took on â€” with the support of JEA’s active, volunteer leadership â€” was the creation of the Advisers Institute. From the minutes of the JEA Board in the fall of 1990 in Indianapolis, a convention I remember well.

People like Julie Dodd of the University of Florida (recently retired), Susan Massy of Shawnee Mission Northwest High School Kansas and John Bowen of Kent State University are still active in the profession 30 years later and have shaped the profession in too many ways to count. That vote back back in the fall of 1990 was but one way they had an impact on our profession.

It was, by all measures successful as Linda reported the following fall, noting that 21 instructors from 12 states attended the Advisers Institute in Manhattan, Kansas realizing a profit of $190.71 for the organization.

So it ran year after year. It started off in Manhattan, Kansas at Kansas State. That was cost effective for JEA but not all that easy to get to for attendees. Still, I taught at my first Advisers Institute in 1996 before I started graduate school at Syracuse University. We taught on purple (of course) iMacs in a hot computer lab on campus using Aldus PageMaker and QuarkXPress.

In 1998, JEA sponsored an advisers retreat “to help advisers become better teachers” at Bally’s Resort and Casino in Las Vegas. The First Amendment/Student Press Law workshop was held at the Newseum Education Center in Arlington, Virginia while the Advising Student Publications and Desktop Design sequences were still at K-State. In 2001, the “Advisers Retreat” in Las Vegas ($225) was officially listed as the fourth sequence of the Advisers Institute “designed with YOU in mind.”

In 2003, I produced a slick, four-color Annual Report â€” the first of three â€” for JEA documenting the activities of the organization, sort of a yearbook for JEA. In it, advisers commented on their experiences at the Advisers Institute, by then more than decade old with instructors such as H.L. Hall, Ann Visser and Mary Lu Foreman.

In 2003, Ann Visser was JEA president, Steve Carrigg and Ray Hopfer co-chaired the convention in Portland and the Advisers Institute moved Sequence 1 on law/ethics to the First Amendment Center in Nashville. But in 2005, with an emphasis on First Amendment rights and responsibilities, creating and maintaining diversity in your publication, Sequence I of the Advisers Institute moved to Western Kentucky University in Bowling Green. And Steve Matson was the Seattle convention local chair. But AI moved back to Nashville in 2006. And off to Philadelphia ($300) in 2007 when Jake Palenske was running NCompass Media and there was a shake-up at NSPA with John Ullmann replacing long-time director Tom Rolnicki temporarily. Tom had an amazing impact on our profession â€” perhaps more than any other single individual â€” and his contribution should never be underestimated, but we moved on. And back to Washington, D.C., in 2008. By 2012, Logan Aimone had been named executive director of NSPA and Mark Newton was president of JEA. The Advisers Institute that summer, a single convention “Innovation and Inspiration,” was at the Flamingo in Las Vegas and registration was $135. The Institute continues today using that model although it moved to New Orleans in 2019.

In 2019, a hurricane hit the city during the Institute and the hotel flooded. 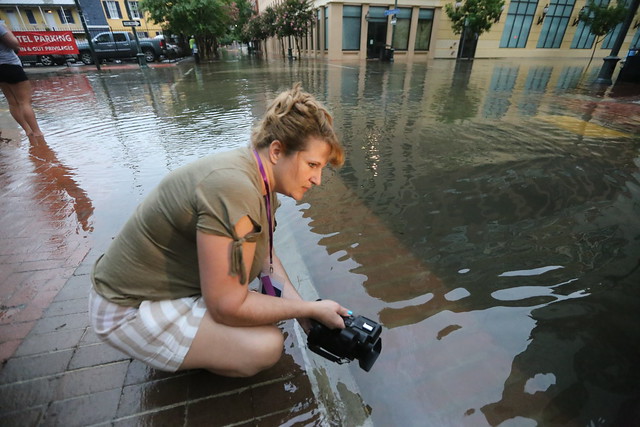 Then in 2020, of course, there was a pandemic. So the JEA Advisers Institute moved to a virtual model. We all learned how to adapt. We videotaped our sessions. We listened to the Linda S. Puntney Teacher Inspiration Award recipient, Kim Green, while she was in Hilton Head, South Carolina, advise instructors to avoid getting a rut. “I just never let myself get in a rut. Keep up on what is current and do that in baby steps. Figure out ways to educate, gently, your department chair, your principal. Educate gently. And let your kids educate. Never feel like you have to fight someone on something. Sometimes it’s just baby steps.” Oh and, “Count the toilet paper rolls.” The first year in any job give people whatever they need. Take care of your people. And then in subsequent years grow and change.

But we missed the beignets at Cafe duMonde.

So, this morning, I made beignets on my own with my puppy, Koda. I produced something like what Mark Murray and I asked students in our DIY Workflow class to do. Well, maybe a bit more of a photo story, but I had fun thinking about NOLA anyway.